Email ThisBlogThis!Share to TwitterShare to FacebookShare to Pinterest
Labels: 1985, Behind the scenes, Material Girl @madonna: Amazing art whomever the artist is!! Lets just hold onto each other! #ghostown ❤️#rebelheart Email ThisBlogThis!Share to TwitterShare to FacebookShare to Pinterest
Labels: 1981, Gotham 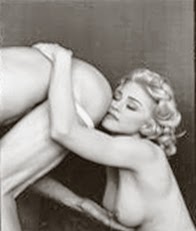 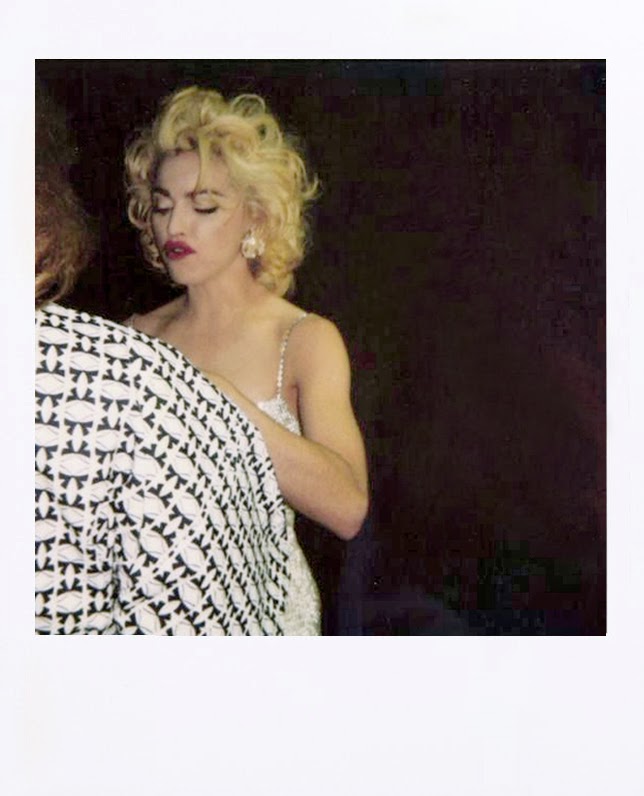 TMZ - Drake I Wasn't Disgusted by Madonna Kiss It Was Her Gnarly Lipstick!!!

Drake was not grossed out when Madonna planted a prolonged lip-lock on him at Coachella Sunday night ... his reaction was all about lipstick aftertaste.
Sources close to Drake tell TMZ ... he loved the kiss. As for whether the kiss was prearranged, Drake says it wasn't ... the plan was for Madonna to dance around him while he sat in the chair.
Drake says he was not banking on a transfer of the glossy stuff and that's why he blanched.
When you look closely at the video, it looks like whatever lipstick there is it's pretty colorless ... either nude or beige. Madonna kicked off her Blond Ambition World Tour on April 13, 1990, 25 years ago this week. Besides offering the world Madonna in her absolute prime – as a performer and as an all-around focus of attention – Blond Ambition changed the pop-culture landscape.

Fans might be surprised to learn that it's not Madonna's highest-grossing tour; Sticky & Sweet, MDNA and The Girlie Show each performed better. And it featured only 57 stops. But it's still hugely important and might have done the most to define Madonna as a music icon – and here are 25 reasons for that.

(NSFW warning: The article features clips from Madonna in concert, and some of the language might not be work-appropriate. Hey, it's Madonna.)

1. It reinvented the concert tour.
Today, most major pop tours are full-scale productions with costume changes, special effects, elaborate sets and a sense of drama that takes the experience beyond someone just singing into a microphone. It wasn't always that way, however, and Madonna and choreographer Vincent Paterson specifically set out to elevate the concert.

As Paterson explained to PEOPLE in a 1990 interview, "The biggest thing we tried to do is change the shape of concerts. Instead of just presenting songs, we wanted to combine fashion, Broadway, rock and performance art."

2. It has full-on acts
The fact that Madonna divided her performances into five thematic categories – Metropolis, Religious, Dick Tracy, Art Deco and Encore – suggests not only a level of creative planning unusual for concerts at the time but also the sheer volume of material Madonna had to work with – and at only 31 years old, no less.

4. It helped cement the link between pop costumes and couture.
In addition to the vast majority of Blond Ambition's many stage costumes, Madonna's bullet bra was designed by haute couture legend Jean Paul Gaultier. In 2012, one of these very bras sold at a Christie's auction for $52,000.

5. It gave us that iconic ponytail.
According to a 1990 edition of PEOPLE's Style Watch, Madonna's clip-on ponytail quickly became a look that fans copied when attending Blond Ambition stops. "Lots of women – and men – are showing up at her concerts with this hairdo," remarked Warner Bros. Records publicity VP Liz Rosenberg. "It's really catching on."

You might think Madonna would do anything for a look, but that clip-on ponytail resulted from one specific need: she needed a style that wouldn't get tangled in the headset she wears when she sings.

6. The title itself was a stand for independence.
Initially, it was to be the Like a Prayer World Tour, sponsored by Pepsi. Of course, the "Like a Prayer" video was met with a great deal of controversy, and Pepsi eventually backed out of a licensing deal with "The Donner." Thus, Blond Ambition was born.

7. It overcame a rough start.
Blond Ambition kicked off on Friday the 13th – Friday, April 13, 1990, near Tokyo, Japan. Suitably, the weather was miserably wet and cold, and at one point Madonna slid across the wet stage and proclaimed, "You didn't know you were here for an ice-skating show. Well, I'm Dorothy Hamill."

8. It featured Madonna at her most perfectionist, for better or worse.
And according to the New York Times review of the concert, that meant the concert was more "live" than live. "Madonna has become so perfectionistic, and so athletic in her dancing, that she would clearly rather lip-sync than risk a wrong note," the review notes. "With tickets priced at $30, concertgoers might expect a more live concert."

Ultimately the police opted not to arrest her on obscenity charges, but she still famously called the Canadian city a "fascist state."

10. It was condemned by the Vatican.
Not that it's a good thing to earn the wrath of the Roman Catholic Church, but it speaks to what a big deal the Blond Ambition tour was that the Vatican's official newspaper, Osservatore Romano, declared the show sinful – a more or less unprecedented decision.

11. "Don't talk. If you talk, I will stop speaking, all right?
Madonna's response to the condemnation, however, was 100 percent Madonna. After commanding the Italian press to cease talking, she defends her performance. "Like theater, [Blond Ambition] asks questions, provokes thought and takes you on an emotional journey, portraying good and bad, light and dark, joy and sorrow, redemption and salvation."

12. Every Blond Ambition performance began with a prayer.
Regardless of what the Pope may have thought of Madonna's work, she felt she was on good terms with God, and Truth or Dare notes that she began every show with a group prayer.

13. She sang "Happy Birthday" to her dad at the tour's Detroit show
There's been no shortage of kerfuffle about Madonna's relationship with the rest of the Ciccone clan, but the tour featured a touching moment onstage with her dad, Silvio Ciccone, at her hometown show in Detroit.

14. … Which means she performed all those naughty bits with her dad in the audience.
There's a moment in Truth or Dare when she mentions that her dad watching the racier parts of the Blond Ambition tour is scarier than confronting the Toronto police.

15. It was a decidedly pro-gay show.
It's notable that Madonna was up-front about the fact that six of her seven male backup dancers were gay men. Madonna, after all, had been outspoken about gay rights and gay people in general long before it became the norm among celebrities. In fact …

16. Its final U.S. performance was dedicated to Keith Haring.
Madonna was good friends with the pop artist Keith Haring, who died of AIDS-related complications on Feb. 16, 1990. The Blond Ambition World Tour's last American stop, in East Rutherford, New Jersey, was dedicated to Haring's memory, and the more than $300,000 the show made was donated to the Foundation for AIDS Research. (Madonna's Sticky & Sweet Tour used a Haring-inspired backdrop, seen in the above clip.)

17. It featured a gay Dick Tracy chorus line.
Skip forward to the 5:45 mark in this clip of the Blond Ambition performance of "Now I'm Following You" to see six dancing Dick Tracys pair off into three male-male pairs. It's quite the spectacle, and it's even more notable when you realize that most of the tour began before the 1990 Dick Tracy remake (in which Madonna starred) hit theaters, meaning this chorus line was the first glimpse fans saw of the reinvented Dick Tracy.

And no, none of those Dick Tracys were Warren Beatty, who played the title character and who was dating Madonna throughout the tour.

18. It was also pro-safe sex.
You have to hand it to Madonna: Encouraging the use of condoms was on-point in 1990, and every show had her introducing "Into the Groove" by saying, "You really never get to know a guy until you ask him to wear a rubber."

19. It mocked the perception of Madonna as a dumb blond sexpot.
For the Blond Ambition take on "Material Girl," Madonna sang the entire song in an accent that falls somewhere between dumb blonde, "Noo Yawk" housewife and gangster's moll. Say what you will about Madonna taking herself very seriously, but most singers wouldn't ever perform in curlers and a bathrobe.

20. It had grand cinematic aspirations beyond Dick Tracy.
The first act of the show is themed "Metropolis." That's not Superman's city. That's the 1927 German expressionist epic Metropolis, and you can see it in the retro-science-fiction aesthetic of the stage. Hey, if you were Madonna, you'd aim for high art.

21. There's some Stanley Kubrick in there, too.
In a 1991 New York Times interview, Madonna described the Blond Ambition performance of "Keep It Together" as "Bob Fosse-meets-Clockwork Orange."

"It's the show's ultimate statement about the family, because we're absolutely brutalizing with each other, while there's also no mistaking that we love each other deeply," she said.

22. Kevin Costner thought the show was "neat."
There's a famous scene in Truth or Dare in which Madonna parties with other celebs after a Los Angeles show. Among them is Kevin Costner, who tells Madonna he found the show "neat." It's an amazing moment, and Madonna is predictably incensed that Costner would use that adjective to describe her. "No one's ever described me quite that way," she tells him. Later, she decrees "Anybody who says my show was 'neat' has to go."

Costner would forgive the diss in 2007.

23. Truth or Dare was a success, too.
The documentary about Blond Ambition was released in 1991. It cost $4.5 million to make. It earned $29 million. Sure, Madonna was nominated for a Razzie for Worst Actress – for playing herself, no less – but she had piles of money with which to console herself.

24. It was parodied twice.
Truth or Dare – and by extension, Blond Ambition – were skewered two times, by Julie Brown in Medusa: Dare to Be Truthful and by English comedians Dawn French and Jennifer Saunders in In Bed with French and Saunders. We'd like to think Madge took it all in stride. Madonna admitted to being something of a "closet comedian" during her Thursday appearance on The Tonight Show, so Jimmy Fallon magnanimously offered to give her some time to work out her material. "Will you guys laugh if my jokes suck?" Madonna asks before Fallon introduces her as an "up-and-coming comedian making her stand-up comedy debut." The 56-year-old Material Girl hit on some very Madonna-esque talking points during her time, including dating younger men, her artwork and ... dating younger men. If anything, it's kind of adorable to see Madonna looking slightly flustered and not totally in control of a given situation.  Besides, even if this doesn't go down as one comedy's legendary stand-up debuts, we'll always have this amazing version of "Holiday."
BY ALEX HEIGL
@alex_heigl
04/10/2015 AT 07:45 AM EDT
Posted by Unknown at Friday, April 10, 2015 No comments: 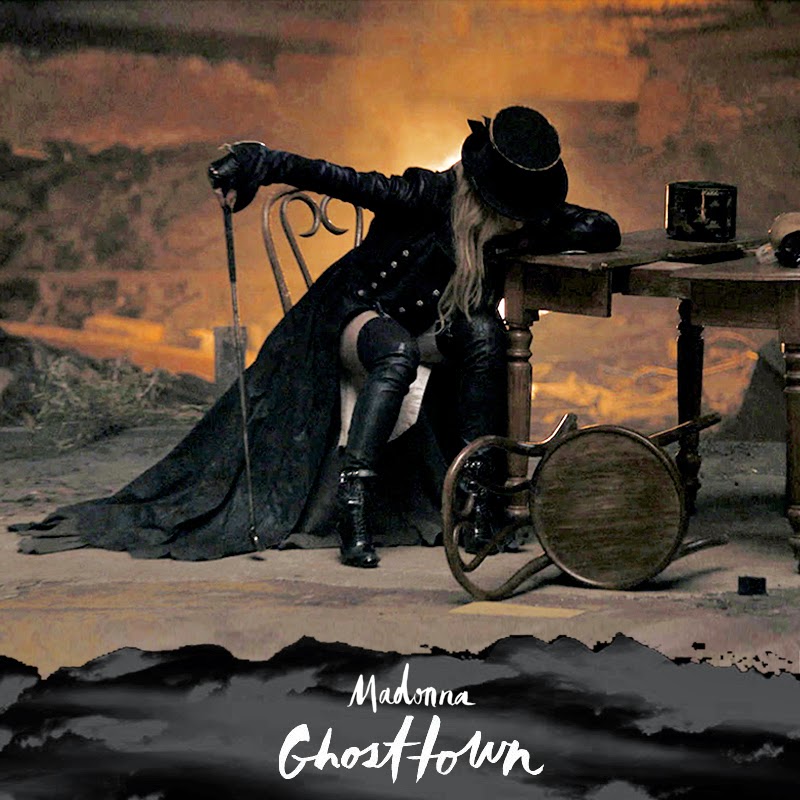 Watch GhostTown at 10 am PST
Posted by Unknown at Wednesday, April 08, 2015 No comments:

“Ghosttown” video will be premiered next week!‪#‎GhosttownVideo‬ What is your ultimate LEAST favorite Madonna Tour?

What songs should be performed for the Superbowl?

What is Your Favorite M Era?

Who Should Madonna Do a Duet With?

What Song Do You Wish Had A Video?

Who is your favorite M producer?

What song should have been released as a single/video?

What song should be performed on her next tour?

Did Madonna go to far with the plastic surgery?